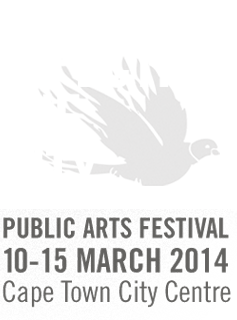 A public art festival in South Africa should invariably mirror the range and complexities of our nation. Our public life is not uniformly simple and straightforward as might be that of a small European town. Our chequered history forces us to be inside a moment that bristles with contradiction: conflict, celebration, dizzying heights and terrible lows. The mourning period following Madibaâ€™s death epitomised this: deep sorrow and joyous celebration played out equally. Infecting The City this year then is an infection of multiple hues. The best approach, given your time, is to engage with several daily programmes. There are works that are conceptual, aesthetically complex, whose meanings are not grasped instantly. And then there are works that grab the imagination immediately.

The absence of an overarching theme has allowed a conversation to develop amongst works. There are themes that will resonate with our immediate time and place, as well as universal ones. In particular, there are several reflections on the twenty-year democracy that is South Africa, personal desire in public spaces and cerebral investigations into form and urbanity.

In a public art festival, one would hope that curation is simply the gathering of works that converse with each other and the City. That, however, is a small fraction of the task. The rest resembles something of an abyss in a developing city:Â  from sourcing spaces to securing viewing areas for large groups of people, to incorporating logical movement from work to work and public footfall.

Ultimately, a public art festival is about art and the public. And as long as that public is not just a small group of in- the- know followers of art, but a complex nation of inequality, varying access, varying levels of free time; as long as it is about publics then the Festival programmes more than just the art works, it also programmes a giddy range of unknowns.

The artists on this programme deserve generous praise. Performing works that have taken large amounts of time and skill to develop, in spaces that cannot be controlled, to an audience that is unpredictable, is the ultimate show of vulnerability and courage. This combination of excellence and ability to be open to a shifting public, is rare and a gift to the City. In this regard, I also want to thank and honour the administration, management, technical support and generous sponsors who make this free public art festival very possible.

The programme follows a series of routes throughout our City. I trust that in your explorations, your enjoyment may be more than just the art works, but also of the engagement with the strangers next to you – of our gloriously complex publics with all its inequities and difficulties, deeply yearning for that glue amongst us to stick and last a little longer than our twenty years.